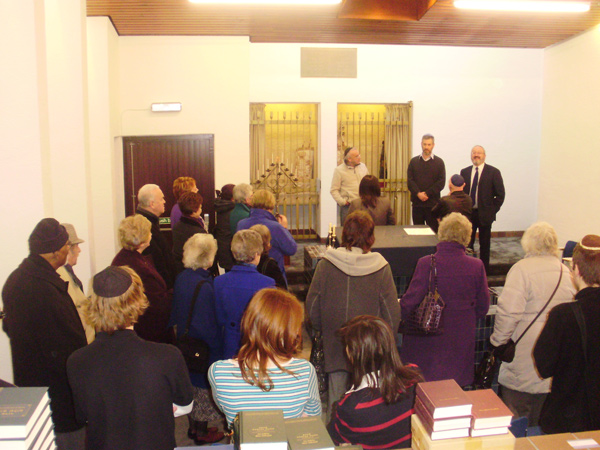 The latest newsletter from the Scottish Council of Jewish Communities contained some depressing news, namely that the synagogue in the city of Dundee is likely to close.   I talked to someone from the Dundee Jewish community after reading this, and he confirmed this was the case, and gave me some background.

Scotland does not have a large Jewish population; roughly 0.1% of the population is Jewish.  This compares to 0.5% in UK as a whole, 2% in US as a whole, and almost 10% in New York City and Miami.  Although Scotland is similar in this regard to the US state of Oklahoma, which is where I had my Bar Mitzvah.   The great majority of Scotland’s Jews live in Edinburgh and Glasgow (Scotland’s major cities), which have strong and established Jewish communities.  In his book Caledonian Jews, Nathan Abrams describes how there used to be Jewish communities in seven smaller Scottish cities and towns.  But in 2017, the only Jewish communities with synagogies outwith Edinburgh and Glasgow are in Aberdeen and Dundee.  And if the Dundee synagogue closes, then the Aberdeen synagogue (which I belong to) will be the only left, north of Edinburgh and Glasgow.  Which is sad…

According to Caledonian Jews, the first synagogue in Dundee opened in 1878.  In the 1880s, there were actually two synagogues in Dundee (even three at one point), with an “established” synagogue for Dundee’s long-time Jewish residents, and new synagogue(s) catering to poor Jewish refugees from Eastern Europe.  The communities came together, and in 1895 a new combined synagogue was opened, and was the centre of Jewish life in Dundee.

In more recent times, in the 1970s the city council purchased and demolished the old Dundee synagogue, as part of a city-centre regeneration plan, and built the community a brand new synagogue.  Although unimposing on the outside, it is beautiful on the inside, and certainly has always impressed me when I visited.

Unfortunately the Dundee Jewish community declined sharply in numbers in the 1980s and 1990s, although this was partially compensated by an increasing number of Jewish students and faculty at the nearby university at St Andrews.  The community almost closed the synagogue in 2001, but decided in the end to keep on going.

But in 2017, it looks like the end has come.  The building is in poor shape, and very few people attend services.  As my friend put it “In Aberdeen you worry whether you will get a minyan (10 Jewish males aged 13 or more) for the high holidays of Rosh Hashanah and Yom Kippur.  In Dundee we are doing well if we get ten people of any gender, age, and indeed religion to our services”.  So the community will probably sell its synagogue, and shift its focus to St Andrews, possibly making an arrangement with the Chaplaincy there to support Jewish events.  But a new synagogue will not be built.

So, my community, the Aberdeen Synagogue and Jewish Community Centre, will probably become the last remaining Scottish synagogue outside of Edinburgh and Glasgow.   We have our own problems, in fact our synagogue is currently closed for repairs because of water damage caused by a faulty washing machine.  But we’ve seen a lot of positive developments as well, and also receive much-appreciated support from the Edinburgh and Glasgow Jewish communities.    So hopefully we will not face Dundee’s fate anytime soon.

One thought on “Goodbye to a Synagogue”